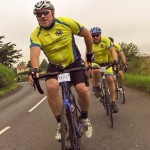 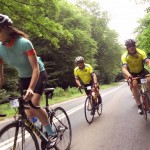 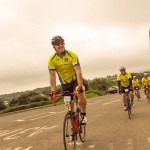 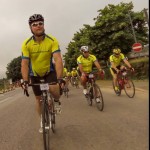 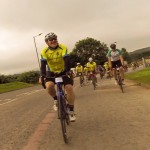 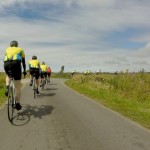 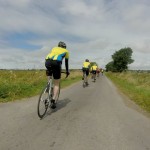 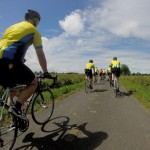 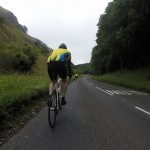 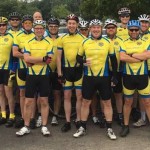 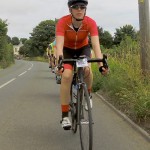 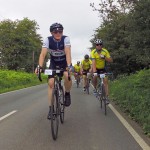 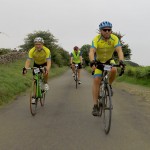 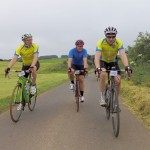 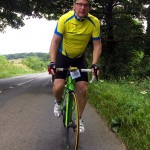 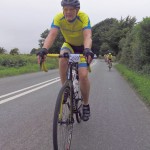 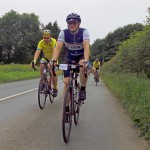 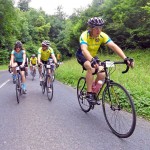 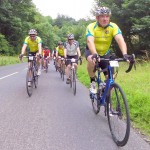 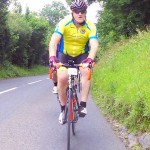 There was mist in the air as the Wheelers left Weston-super-Mare at 07.30 Sunday 17th July for a circular ride taking in the Great Weston Ride in aid of Prostate Cancer research. This year it had been agreed that the lead riders would not tear up the road at 25 mph leaving a trail of blue and yellow jerseys in their wake and, for ten minutes or so, we kept strictly to the plan. We regrouped at Brockley coombe where our lady members joined us and set off again for the Long Ashton Park and ride; the departure point for the GWR. The plan was to complete all the additional loops to make a round trip distance of about 100 miles. The goal was to stick together so the public would see a phalanx of almost 20 Wheelers jerseys passing through each village. All went well until the first climb began after half a mile, and the group became a chain which broke in several places as the different climbing styles emerged. We regrouped at the top and split apart during the descent of Belmont hill as the heavy, the reckless and the ones with poor brakes left behind the those with a more measured approach. The mist burned away, the sky cleared the sun shone and after the frantic dash across Chew valley into a head wind, the slog up Burrington Coomb, the mind-blowing drop down from Shipham quarry to Cheddar which saw some of the Wheelers reach 50 mph, the ascent of Cheddar gorge we renewed our commitment to keep the pace steady, avoid becoming strung out and move as a coordinated unit. At the official refreshment area at Hugh Sexey’s school coffee was drunk, and some excellent cake consumed as we consolidated once again. We set off together for the final push for home and maintained a reasonable formation until we turned into the wind at Bridgewater. The Wheeler’s disintegrated; the big guys pushed to the front of each fragment as the rest of us sheltered behind. A final regroup at Uphill and we rode to the finish line as we started, together. You would be wrong to mistake this for a tale of dysfunction and disagreement. The Wheelers are not clones, we are individuals with our own strengths and weaknesses, but we respect our differences and nobody minds waiting at the top, the bottom, or the end of along drag. What might seem like chaos is camaraderie and you are welcome to become part of it. Jonathon McMillan - Wheeler