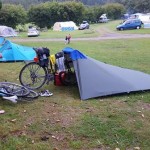 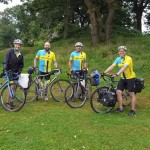 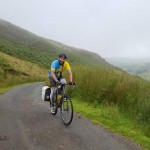 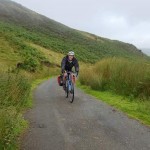 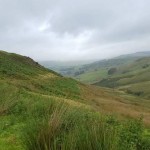 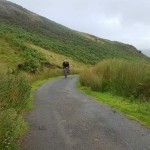 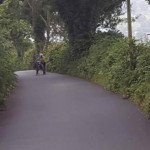 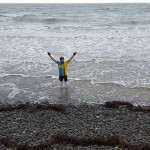 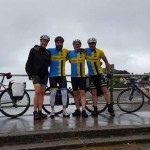 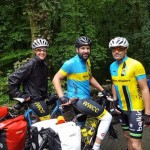 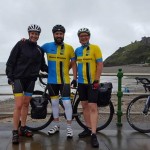 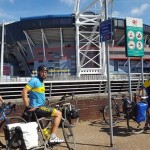 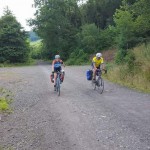 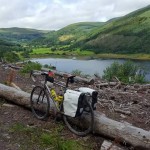 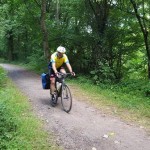 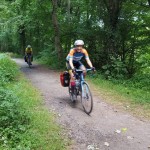 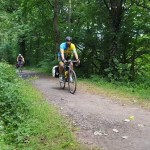 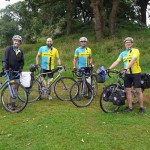 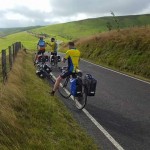 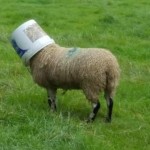 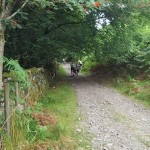 Congratulations Alex, Laura, Paul and Andy on a fantastic achievement conquering the NCN8 route from the north to south coast of  Wales. Read about their adventure below!   Day 1 What a day! Started in lovely sunshine and a lap around the Great Orme (Some would say the wrong way) after a small detour to find a steep hill to send Andy up. Then heading West along the undulating coast we managed to get to Bangor before the rain started 🙁 we than had the joy of 18mph head wind and rain to Caermofon. We omitted not to stop for coffee and press on for the campsite. Turning left and heading south we picked up the ncn 8 properly and headed along feeling rather wet and miserable by this point. Finding the campsite and being amused by Andy's tent erecting skills a nice warm shower, we headed back into Caermofon for a Weatherspoons refill.   Day 2 and what can I say apart from EPIC! We're all in agreement that it was the hardest days cycling we've done, but... what a day! Dry when we woke up but wet rain by the tent down and leaving time 🙁 this then set the scene for most of the day. After a spinning downhill start with a few cheeky 'rises' we found ourselves in Criccieth for a beach photo opertunity. From there it was off to Porthmadog and then the hills started. Short and sharp to begin with a few walking sections for the more loaded of us. Then came a nice long ascent to the summit above Harlech where we were greated by guess what... Yes harder rain and a bit of wind! From Harlech we popped down the coast for lunch at Barmouth where we dined at the Isis cafe before starting again very cold to a great spin across Barmouth bridge and up the Mawddach trail to Dolgellau and the start of the biggest climb of the day. And what a climb, which took us to the summit of Cadir Idris's neighbour and though not a true mountain was plenty high enough. Once over to top we had what I belive is the best road in the UK with about 2 miles of great decent with superb views. Unfortunatly there was no flying on the Mach Loop today due to the low cloud base, but we were done with excitement by then! At last the rain cleared and we had a dry struggle into the campsite with one last unexpected climb. Hot showers and a walk to the local for posh nosh and rehydration. Day 3 and 4 A quick summary of the last 2 days of the Lon Las Cymru ride Day 3 started with the same putting on of wet kit Off we went riding through Machynlleth and onto the biggest climb of the ride and then the worst would be behind us… well we were correct about the big one… Cat 2 climb with 1500ft and 20% in places, but we did it and after was a great decent. But then we were wrong about the worst being behind us as what followed was an unrelenting terrain of steep hills, short descents all on a mixture of paved roads, forest tracks and ancient coach tracks making the going very tough. If the weather had been the same as the previous day, then I’m sure we may have cracked. This was by far the hardest day of the trip. During one of our pit stops to refuel, we noticed that Laura had been riding all this way on a 25t rear cassette! KUDOS! Other items of note that day were, Alex rescuing a sheep with a bucket on its head, some numpty bragging about riding up rocky coach path and then immediately falling off and Andy’s quest for the ever elusive café. Day 4 was powered by paracetamol So it started, SUNSHINE and an unexpected 20% climb, were all Wheelers present scooped a Strava trophy on very sad sounding bikes and 180mile legs. Onto the first real climb of the day which was by now in rain. A slippery moss covered 17% number saw us all having a nice country walk at some point! Pushing on and into Brecon, the sun came out again and we picked up the canal path for some picturesque FLAT cycling so we opted to follow the canal path a bit further when the official route veered off as Laura & Alex had already ridden this part of the trail, and how nice it was too. Re-joining the NCN route we ascended to Talybont Reservoir where in appreciation of Laura’s brilliant effort on the ‘corn cob’ rear cassette, we all climbed the 5-mile gravel fire track in the same gear as her. (thank god I have a 34t) From here on it was all downhill, literally, picking up the Taff Trail and cycling through more and more urban settings than we had been used to Merthyr Tydfil and ever onwards towards Cardiff. After a small detour and another quick lie down in the road from me, we rode alongside the beautiful river Taff and after stopping for one last refill by the Millennium Stadium we were finally in Cardiff bay and the end of our 260mile 18,000ft ride. A quick group photo then off to find the hire cars. What a great trip, it’s funny how something so painful and miserable can be so fun! Many, many thanks to my 3 amigos Laura, Alex and Andy without whom the ride wouldn’t have been the same. If you want a challenge, ride the NCN 8, if you want to supersize that challenge, ride the NCN 8 unsupported, if you want that challenge at Chuck Norris level, then borrow Laura’s bike!!! By Paul Stone Adventurer and Wheeler